This is one in a series of eCommerce Strategy posts. You can read the rest here.

In the early 20th century, Radios had become a household item, albeit a big, expensive one. Vacuum tubes sucked a lot of power, and radios were a piece of furniture.

That was, until 1955 when Sony launched the transistor radio. It was small, portable, and battery operated. It didn’t sound as good - instead, it was marketed as a “lifestyle device”, something you might take with you to the beach or put in the car.

The rest of the story is history: by the 1960s, the transistor radio was the dominant listening device, and the old vacuum tubes had died a slow death.

This is the parallel we see today in online shopping. For the last decade, the incumbents haven’t changed much: 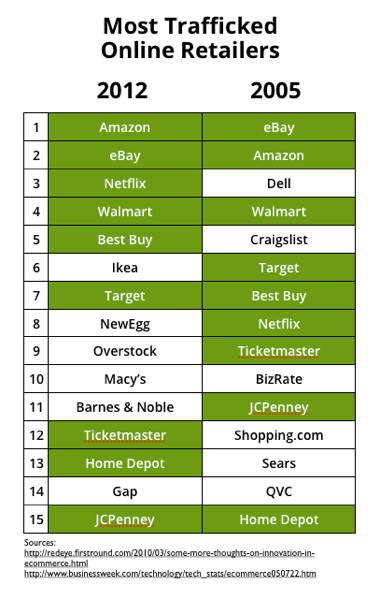 Amazon has an unquestioned dominance in this space. Their size, efficiency, and breadth make it so no one can compete:

Last year, Amazon’s Q4 growth was double that of online retail overall. Competitors point to Amazon stealing share with offerings like Prime and the Kindle that lock up consumer spending in ways that few, if any, other retailers have the scale or resources to match. And “showrooming” is generally just another way of saying “Amazon.”

So what are the thousands of other online retailers to do? Often, teams sit in a room looking at the features Amazon and other competitors have and try to add those. The problem is that matching Amazon’s eCommerce features isn’t going to match the soul they have - their size, efficiency and breadth.

Instead, we can learn from the story of the transistor radio: your online store needs to sell a “lifestyle story” - some unique story about the things you sell. You may not have the breadth of Amazon, but you might have a deep understanding of one particular space, or you might be able to make your store’s experience interesting and unique.

Sony’s success with the transistor radio came from shifting the conversation for their customers. Knowing that they fell short in sound quality compared to the vaccum tube radios, Sony’s marketing emphasized their benefit: the size. They didn’t just tell consumers it was smaller, they showed them using it on the beach, in their car, and carrying it around. They didn’t compete on features, they competed on the story.

An eCommerce site should be about more than just selling stuff. It should embody a set of values that are distilled in how the product looks, how it feels, and what it contains. It should have an opinion - the story is how we go about telling it through our interface, how we merchandise, the photography, and the products on the site.

Gilt Taste tells stories around the gormet food they sell. When you first load the site, you’re not smacked in the face with the products themselves, instead their hero banners are interesting articles related to cooking. Within the story, they might place one of their products, but you can just as easily walk away from the article having learned something. They’re ok with not selling you something every visit - it’s about developing your brand by helping your customers even when they’re not necessarily buying something.

Fab puts a unique spin on online retailing: they want to sell beautifully designed items. It might range from a poster to a pair of jeans, but what they sell will be beautiful and well made. Here’s the kicker: they only sell a few dozen items at once for a limited time. There’s a psychological effect at play here when you see an item you like and it says “Sale ends in 2 hours.” In this case, you’re much less likely to put off your decision if you see something you like.

When denim designer Paper, Denim & Cloth decided to make a comeback this year, they wanted to do it in a unique way. It’s common for fashion designers to make a “look book” for retailers to show them what their seasonal lines will be. Paper Denim took a different spin on it: they photographed theirs real time on Instagram and broadcast it to the world. It was an extension of their clothing line’s story:

It fits in with our idea that getting dressed should be easy — with Instagram you can’t retouch, it’s what you see is what you get. It’s the opposite of fussy.

Disrupting Amazon isn’t going to come from matching them feature by feature. As eCommerce teams, we need to focus on moving up the User Experience Hierarchy of Needs, from functional to meaningful: 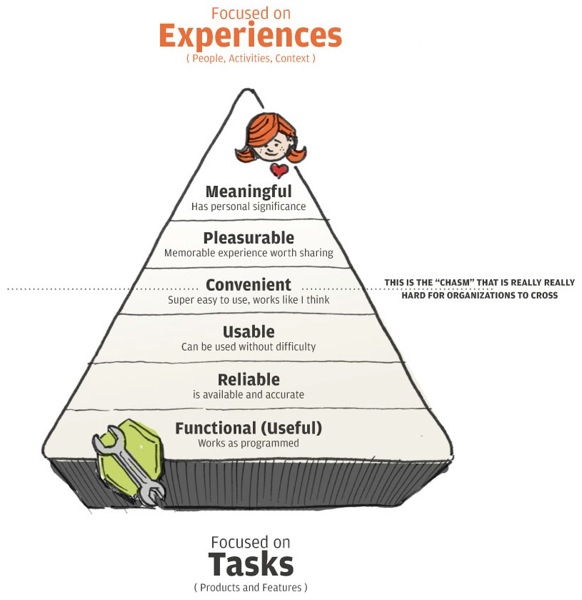 We need to achieve functionally “good enough”, but then ask ourselves the question of “How can I build a more meaningful and emotional connection with my customers?” Disruption in eCommerce is going to come from emotion: the companies who can break free of the sterile, efficient shopping of Amazon and make it fun and engaging, much like hanging out at the Mall might have been a decade ago.